Some years ago I won an all expenses paid trip to the Seychelles Islands for my wife, myself and our baby daughter, as part of a top salesman award.

Prior to this my only knowledge of the Seychelles was idyllic white beaches, palm trees and blue seas which I had seen in magazines. You know those pictures that you look at and say in a dreamy kind of voice, “Wouldn’t you love to take a trip there”?

I was aware that I had won a prize, but quite what prize, was kept secret by the management of the company for whom I worked.

There were a small group of us in the party that left the airport that day, buzzing with excitement. Apart from the managing director and his wife, none of us had ever been to the Seychelles before.

The excitement continued throughout the five hour flight and heightened as we approached the airport in the town of Victoria, capitol of the island of Mahé, largest island of the Seychelles chain.

There it was, laid out before my very eyes – white beaches and blue, blue sea. So, not all travel brochures were an exaggeration, I thought to myself!

Once we stepped into the outside air exiting our nice cool air-conditioned cabin, it was if we had stepped into a blast furnace! 30 degrees Celsius with humidity at some 70 percent, we were later informed and this was 4 PM in the afternoon.

We had left home in Johannesburg on a cold (10 degrees Celsius) wet morning with chilling winds gusting.

Fortunately our hotel was air-conditioned and in any event it took us all of about one day to settle in to the climate.

There are some one hundred and fifteen islands in the Seychelles, most of them uninhabited. The Portuguese admiral, Vasco Da Gama, discovered these islands in 1502. The first recorded landing was in 1609, by Captain Alexander Sharpeigh of the British East India Company.  The French took control in 1756, the British in 1814 and finally a crown colony was established in 1903.

The predominant language spoken on the islands is Seychellois Creole, then French and finally English.

The facts done, we continue with the Safari.

A day after we arrived, we rented a vintage schooner that had been faithfully restored by its owner, a retired Swedish Naval Captain. He, his two sisters and a dog which had never set foot on land, chartered this large 9-sailed schooner for tours around the islands.

Sailing into the Blue:

We set out from Victoria harbor on a cloudless, windless morning on our three day tour. The sea was smooth and the twin diesel engines throbbed us out of the bay. I was thinking how pleasant this was, until the captain shut the engines down, then he and his older sister began to hoist sail, whilst younger sister took the helm.

I could not come to grips with the scene that next unfolded before me.

The moment the main sail was up, the boat became (to me) a monster, as she slew though the waves at what seemed to be some speed!

Looking over to the one side I saw a massive wave that surely would engulf us, and then what appeared as only seconds later we were on top of the wave and staring down into a watery precipice below.

I was overcome with a flood of nausea – sea sickness, my very first experience of the dreaded disease! I buckled at the knees, and gripping onto the side rails, began making some strange sounds toward the sea below. All the while, my little daughter, happily sat on her blankie in the center of the deck stared at my antics in obvious disbelief at her father’s strange behavior.

It took me a full day to recover and eventually gain my sea legs, before I could really enjoy the most beautiful scenery I have ever seen in my life, We anchored off a most splendid white sand beach and scuba-dived in the calm, warm blue sea, witnessing some the most magnificent marine life, that swam around us, seemingly unperturbed by our presence.

We visited Praslin, the next biggest island after Mahé, where we saw the most inconceivable species of wild birds in the Vallée de Mai, but most interesting of all was the discovery of the coco de mer fruit. A large coconut styled outer shell, that has a gel like substance inside, when cracked open. The fruit grows only on Praslin, with tiny amounts on two other islands. The locals cut the outer shells and shape them into baskets. They also do a little carving on the one side so that at first glance, if held upright, it bears resemblance to naked female buttocks. 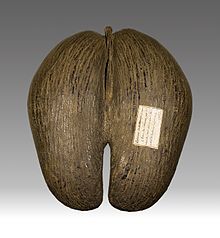 Folklore has it (according to a guide that took us through the forest, where the coco de mer grow) that late at night, once a year, a stamen like fruit, up to a meter in length and bearing resemblance to the male organ, comes across to penetrate the coco de mer and fertilize it, for reproduction. The ‘reproduction’ process takes up to 9 years to bear fruit. 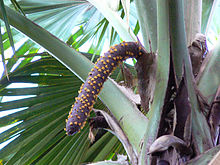 We saw headstones with inscriptions that dated them to the late 1700’s with French names, obviously placed there during the French occupation of the island.

We paid a visit to the next biggest island, La Digue and saw many interesting sites. Firstly, so many beautiful beaches, giant turtles, tortoises, some up to 100 years old! 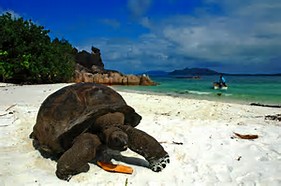 Returning to Mahé we passed a small privately owned island which had a huge colonial styled stately home on it, that could easily have been a prop for ‘Gone with the Wind’ .

All in all, if I spent a year in the Seychelles, it would not be enough to take in all the beautiful and fascinating places.

There was so much more that we enjoyed, apart from the sightseeing; water ski-ing, game fishing. Hotel was beautiful and clean, good décor. Food was exotic and tasty, night life interesting.

As a holiday destination, it gets five stars from me.