Salmon Fishing in the Yemen

As the book suggests, ‘Credo, quia impossibile est’ –‘I believe it because it is impossible’.

Hooking salmon in the desert? Surely not!

My first impression at seeing the video title, was, “Is this real?

Then on watching the video I decided, “Well…maybe”.

Only then did I read the book.

If you are like me, who loves the idea of reading about people who accomplish their dreams, then this is a read for you.

If you are like me and insist that all your story endings must be happy, then this is not the read for you – but, the good news is, the video certainly will, as its ending is different from the book (understandably).

The book’s plot is good, inasmuch as it combines firstly, the human touch: relationships and some romance (as far as the British ‘stiff upper lip’ allows it in the book, but much better in the video).

The Author has a keen understanding of British politics and culture; In addition, at the point of writing this novel, had 15 years of fly fishing experience.

The characters in the story are colorful and very different.

There is Dr. Alfred Jones, a scientist working in the National Centre for Fisheries Excellence, a married man with no children and apart from one paper on ‘Caddis Fly Larvae’ for which he received much recognition in academic circles, his world is very small and limited to his research and a career driven wife.

The Sheik Muhammad, from the Yemen, a spiritual man, who had a dream about his fellow Yemeni’s joining in his passion – fly fishing. Understanding that his countrymen do not have the resources to travel to Scotland, where the Sheik had a country mansion and enjoyed his fly fishing in the river running alongside his lands; he had decided to take fly fishing to the Yemen – whatever the cost. He never knew what the ultimate cost would be to himself, but I rather feel that even if he had known, it would not have deterred his aim to see his dream accomplished.

The Sheik is a man of strong faith – to the death and he has, it would seem, unlimited financial resources.

Ms. Harriet Chetwode-Talbot. A young attractive career minded, but charming lady, who is employed in the services of a real estate company who have been commissioned by Sheik Muhammad to initiate the project of his dreams. She takes on the project boldly in face of personal fears regarding the safety of her fiancé, Captain Robert Matthews, who is serving in Iraq and whose fate has an unusual twist in the end.

In addition, there is a full support of interesting characters, all playing an important part for the ultimate accomplishment of the author’s plot. 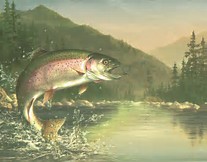 Harriet succeeds in motivating the very reluctant scientist, Dr. Alfred Jones to accept the project, albeit that Alfred’s boss, with a very strong nudge from the Prime Minister’s Office, insists that Alfred undertakes the project, however hare-brained it may seem to the scientist and this to aid British/Middle East relations.

The plot is a very clever mix of British and Middle East politics and the pressure that is brought to bear on ordinary citizens by politicians, in the pursuit of their ambitions.

To equal degree is the faith that certain people are prepared to match against all odds in the benefitting of their underprivileged fellow humans.

So the choice is yours – book or video?

Choose from Amazon links below.